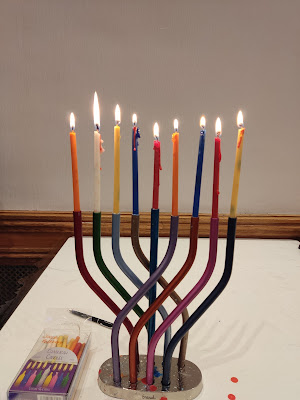 Welcome back to my blog! I haven’t been writing here for a long time, but now this Chanukka I was inspired to write! Last week I stumbled upon a very sweet piece of Torah when searching for Chanukka on thepeoplestalmud and scrolling through the results (note: thepeoplestalmud is a directory and collection of Talmudic passages sorted by different categories and topics written in simple and entertaining language.).  One of the results was this section in the Tractate Eruvin, which surprisingly talked about Chanukka, specifically about the Machloket (disagreement) between the School of Beit Hillel and the School of Bet Shammai about how to light the Chanukka candles. Bet Shammai held that one starts with 8 candles on the first night and decreases the number of candles with the consecutive nights. The reasoning draws on Chanukka’s origins in the Sukkot holiday when the number of bulls sacrificed each day decreased from 13 to 7 (8 days). Beit Hillel on the other hand held that on the first night one should light one candle and increase the number of candles with the consecutive nights, the reasoning being that one should always increase, not decrease,  in holiness (and light). So as it often happens in the Talmud, the ruling is according to Bet Hillel, and the Halacha follows that tradition.
On the first day of this Chanukka, I saw in my Instagram feed someone explaining that there was a tradition in their family to light according to both traditions, Bet Hillel and Bet Shammai. I was so intrigued! They wrote that their tradition values both opinions and makes sure that the minority opinion is never forgotten, since having a minority opinion is integral for constructive democratic discourse. I loved this idea so much that I am playing with the thought of adopting that tradition myself next Chanukka!
Now, this piece of Talmud from Massechet Eruvin comes at the end of a section that dealt with differences of opinion between the two schools regarding a Sukka. In it, another yummy tidbit about the aforementioned difference of opinion between the Schools is included. It goes: The arguing between the two schools about the lighting of the Chanukka candles has been going on for quite a while, when a Heavenly Voice came down from heaven and declared: "These and these are the words of the Living God". How can this be true?! asks the Talmud rhetorically! The offered answer fascinated me: The two opinions can be seen as one circle turning in one direction. When just looking at the top part of the circle, one sees the half-circle arch turning in one direction and when looking at only the bottom part of the wheel, one sees the half-circle arch moving in the other direction. So it's also with the two opinions of Bet Shammai and Bet Hillel: Bet Shammai is the "Heavenly" Torah, the upper part of the circle, while Bet Hillel is the "Earthly" Torah, the lower part of the circle. However looking at the Big Picture, they are both part of one whole, both reflecting the will of God, and both moving in the same direction. 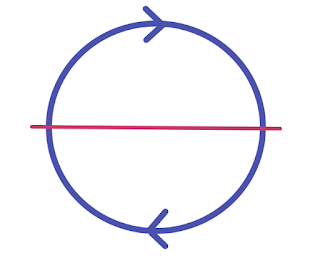 When I shared this teaching with the person who lights their candles according to both traditions, they added a very beautiful cherry on top: When looking at both the Chanukiot together, each day there are always 9 Chanukka candles burning in total and one Chanukkia is passing it's light to the other. Light is often analogized with the Torah itself and I think it fits so aptly here: The circle is only complete and moves in the same direction when there is a passing along of knowledge, experience, and inspiration to the other.
It reflects how the two seemingly opposing sides in a conflict or disagreement are actually just different responses to the same issue or problem. It’s their different perspectives and assessments of the matter that leads to the different stances. Yet in such disagreements, there isn’t a right or a wrong. Focusing on the similarities, rather than differences, shared by the two sides and it becomes apparent both sides are right. Neither side is discrete; rather, both sides are part of the same continuum. Instead of trying to defeat the other, they should join their energy and address the underlying issue(s) together, thus moving in the same direction on the Hillel-Shammai circle.
I know this all sounds too good to be true and too utopian, but exactly these kinds of dreams are what keep(s) the engine of activism running. This is why I am standing firmly by my words and by my dream of a better, peaceful world, where there are no wars or bloodshed,, The path to get to this better world requires working together through constructive disagreement, democracy, and pluralism.