The week began from my first workday Sunday. A little unusual going to bed on Mozey Shabbat with the alarm for 6:15. I had to wake up early for Shacharit. One of the Pardesniks had a Yahrzeit and asked for a minyan to come together. People were eager to come! Even if that meant sacrificing an hour of sleep. The tfilah was outside in the park and the day has not become hot yet, so it was very pleasant outside.

For the first class we had as usual on Sunday/Tuesday/Thursday our Talmud class. We started covering the 3rd Mishna in Rosh haShana. We were still in the chevruta rotation, so we got assigned a chevruta we didn't have yet. In retrospective I feel like I have a fair amount of Jewish knowledge, but almost no skills regarding independent reading and understanding of Talmudic text. During the chevrutas, I often feel like my hands are bound because I just don't know the correct way to read it. That's why I also sometimes ask myself, if the Advanced class for Talmud is the right choice for me. But I also know that it is yet too early to make a decision. I am challenged and that is the whole point. I am also taking Daniel Reifman's Talmudic Skills class now (Sunday/Thursdays), so I am confident, that soon that feeling will pass and I will learn the necessary tools.

In the afternoon we had our second PEEP class. Daniel Rose, Director of Yesod, gave the first half of his class about the history of Experiential Jewish Education. Essentially "experiential" is used as a synonym for "informal". That already shows one of the core characteristics of informal education, which is the experience. We also talked about student centred education and the importance of having a curriculum, despite informal education happening outside of class. Daniel supported those topics by letting us discuss how Jewish texts like the Hagadah are teaching us about Jewish education. The Hagadah stresses strongly with the narrative of the story and the importance of reliving the experience as core to learning, understanding and internalising a message. 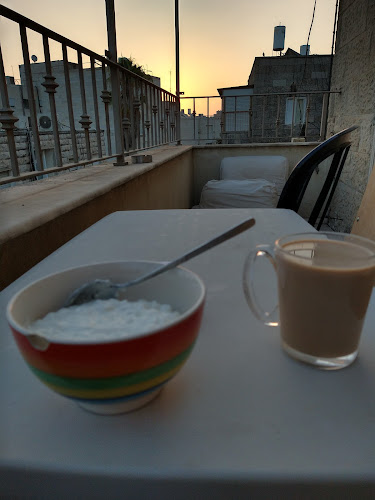 Starting the day with breakfast on the balcony and a beautiful view of the rising sun on the horizon is the reward for getting up early for Minyan. Because it was Monday, I have volunteered to read a portion of the weekday Torah reading. I have practiced all weekend for this reading. It went well and the people were pleased with my performance. During the Shacharit I was also pleasantly surprised by a Kohenet duchaning (blessing) us during the repitition of the Aminda. I always thought that the Conservative movement does not differentiate between Kohanim and Leviim. However I think there is a quite beautiful element in the fact that women to feel empowered to also bless the Jewish people. For all those wondering, yes we also started a traditional (we call it mechitza) minyan at Pardes. For Mincha we had our first minyan and I had the honour of leading that service too. For me when Jewish people pray, it's Jewish people praying, no matter who they are or what they think as long as they do it from an honest heart, it is always something beautiful and holy.

During noon class we had Biblical Hebrew. I learned that the Otiot Sofiot were actually the original letters. Only much later have they become the sofiot (ending letters) and the regular letters we know now took their place. An example for this is Isaiah 9:6 if you want to check for yourself. Look out for the Ktiv / Kri (that word in the flow text without vocalisation in a standard chumash). We also covered the vocalization marks and talked at length about the Schwa, the silent vocal (or so you might think). Turns out that in some cases it is not silent at all, but gives the letter a certain half sounded "h" added to it. Ring me up and I can demonstrate. Towards the end we also talked about the dagesh (that dot in a Hebrew letter). The role of the dagesh is to harden the letter (meaning making it sound double). After class, the teacher, Howard Markose, approached me and asked how to pronounce "Wagen" and "Tage" in North German. I told him how I would pronounce it, but that didn't seem to help. So I asked him when that book was published (where this was written) and he said 1910. I said I would ask my grandmother about North German dialects in the beginning of the 20th century. Turned out that the "g" in North-East German dialect is pronounced like a "rch", which is exactly the original sound of the Hebrew letter gimmel without a dagesh. With a dagesh it would be a "j" like in the word "jello".

Little did I know what was hidden in the world of Biblical Hebrew. I am excited for what comes next!